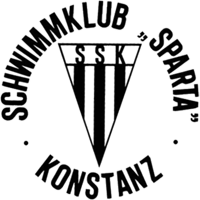 "During the occupation period all sport clubs in the French zone were banned. The Konstanz spa and indoor pool were closed for public access. At the beginning of 1946 they were used by occupation forces. The citizens of Konstanz had only a few hours of access once a week. At the end of 1946 Sport VFL Constance was authorized again and used for all kinds of sports that were open to public and approved at the time. The swimmers belonged to the VfL Swimming division. This division had a practice lesson once a week. For the technical reasons the indoor pool was not heated and could not be opened every day. When visiting the bath it was necessary to bring heating materials in addition to entrance fee.

After the 1st International “Swimming Cities” Comparison in 1949 Konstanz indoor pool together with Kreuzlingen, Rorschach, Schaffhausen and Friedrichshafen were documented. For the first time after the war (on November 5 , 1949) swimming teams consisting of three nations compete against each other. The SC Zurich, CN Mulhouse and VfL Konstanz faced each other in the Zurich 50m indoor pool. Konstanz can be claimed to be the first German city after the war where international swimming competitions were held. The Swiss friends, especially the ones from the neighboring city of Kreuzlingen, were very grateful for this great support. “

Swimming club Sparta Konstanz was founded in 03.10.1951. For this purpose many members of the former swimming division VfL Konstanz (Physical Education Association) met in St.Johann hotel. The former pool administrator Hr.Schouven was the head of the founding committee. The French occupation forces claimed that all kinds of sports should be organized in VfL. Only in 1950 this rule was relaxed and sports departments in VfL could start their own activity. With the establishment of the separate swimming club certain preconditions had to be created to provide a broad foundation for the swimming sport in Konstanz. For this reason it was necessary to get separated from VfL Konstanz.

A year later (in 1952) there were already 250 members (161 were young people). Today there are about 560 members which is number two by quantity in South Baden. Right after the foundation there were three divisions created: swimming, water polo and springboard diving. The additional word "Sparta" in the team name was proposed by Hr. Schouven.

• With over 650 members we are still experiencing a constant and steady member.

• More than 15 - 20% of our members voluntarily participate in the association activities (e.g. training operations, organization of the events).

• We have 45 volunteer trainers in total.

• We have made swimming training possible for more than 900 children and adolescents during the last 5 year.

• We have a clubhouse in the indoor pool at Seerhein with our own fitness and gymnastics rooms.